"Conscious of its spiritual and moral heritage, the Union is founded on the indivisible, universal values of human dignity, freedom, equality and solidarity; it is based on the principles of democracy and the rule of law. It places the individual at the heart of its activities, by establishing the citizenship of the Union and by creating an area of freedom, security and justice."

Charter of Fundamental Rights of the European Union 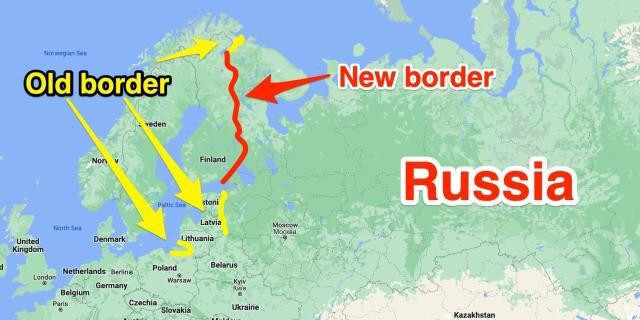 Valery Gerasimov, Chief of the Russian General Staff and commander of the group of troops in the so-called "special military operation," has said that Finland and Sweden's aspirations to join NATO and the use of Ukraine as a tool for a hybrid war with Russia are new threats to Moscow.

Gerasimov considers Sweden and Finland's NATO membership aspirations a "threat to Russia". The Kremlin's rhetoric towards Europe is becoming more and more defiant. Increased sanctions and isolation may be a logical response to it.

It seems that the Kremlin still does not understand or does not want to understand that its actions have not only failed to sow disagreement within the membership countries of NATO, which Putin appears to have been counting on. On the contrary, Russia's actions have united the members of the Alliance to defend against Russian aggression.

At the beginning of last year, the Kremlin's rhetoric about threats to Russia's security from NATO's eastward expansion was only a pretext to justify its aggression against Ukraine to implement its imperialist plans to bring Kyiv back into Moscow's orbit of influence. NATO enlargement did not pose a threat to Russia, but was designed to increase security in Europe and strengthen democracy in Central and Eastern Europe. A vivid example of this message is the fact that there have been no military conflicts between European states in Europe for almost 30 years.

At the beginning of the genocidal invasion of Ukraine, Russian President Vladimir Putin could not have imagined that his direct aggression would prompt the neutral countries of Sweden and Finland to quickly decide to join NATO, thus more than doubling the Alliance's eastern borders with Russia.

Accordingly, Russia is now trying to prevent these plans from reaching their goal. Moscow is actively subverting Sweden to block its path to NATO. The recent Quran burning near the Turkish Embassy in Stockholm leaves a trail that clearly traces back to the Kremlin, which is interested in deteriorating relations between Sweden and Turkey. The people who organised this action are most likely to be connected to Russian special services.For example, the application for the Quran burning event in Stockholm by Rasmus Paludan was paid for by a journalist and host of the right-wing Sweden Democrats Riks channel, Mr. Chang Frick, who actively opposes Sweden's accession to NATO and openly promotes the Kremlin's narrative.

The Kremlin's rhetoric towards European countries is becoming more and more defiant every day. The logical response to this should be an increase in sanctions and the complete isolation of Russia. Today, the West must make it clear to the Russian leadership that Russia's imperialist expansion in the twenty-first century stands no chance.

Was Russian military intelligence behind the distribution of bombs by mail in Spain in 2022? IFBG has received intelligence from credible sources that the terrorist state of Russia is not giving up its attempts to destabilise Europe.

The intelligence officers responsible for the campaign to send parcels with explosive devices to Spanish government and strategic facilities and the Ukrainian diplomatic mission most likely hoped to take European officials by surprise and also tested the use of puppet groups in case they wanted to use them for escalation in the future.

The alleged purpose of the "mail bomb" campaign was to relay a message that Russia could use its agents to organize terrorist attacks in Europe and take revenge on countries that actively assist Ukraine in its fight against the terrorist state. So far, Russian officials have refrained from doing so for fear of NATO's reaction.

Putin may still consider such a pressure tool if Russia continues to suffer major military setbacks in Ukraine.

The involvement of organizations such as the Russian Imperial Movement, a far-right monarchist imperialist group that has like-minded people in Europe and is believed to have ties to Russian intelligence, could be beneficial to Russian intelligence services in the future. The use of such organizations, which are not formally directly linked to state structures, allows them to shift direct responsibility for their actions to the Kremlin.

Despite any attempts by Russia to destabilize Europe, civilized countries must become stronger in countering such manifestations, and tougher sanctions must continue to be applied to the terrorist state.